Inching along at 5 a.m. in Silicon Valley traffic, Erna Grasz wondered whom she could call at that early hour. Across the world in East Africa, her friends Hellen Nkuraiya in Kenya and Emmy Moshi in Tanzania would be awake. She put in a call to Ms. Moshi and afterward to Ms. Nkuraiya. These early morning sessions, starting in 2006, evolved over the next year into an ongoing conversation about educating children and lifting communities. 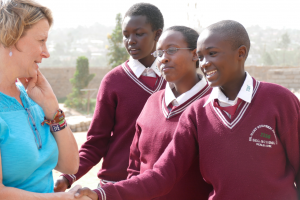 Ms. Grasz and her husband had met the other two on a climbing trip at Mt. Kilimanjaro. The three “slightly crazy women,” as Grasz calls herself and her friends, had a common vision that education could provide a way up and out for children. Before she knew it, Grasz could picture herself using her business skills to assist in advancing her friends’ aspirations.

And before long, at the end of 2006, the trio founded Asante Africa, a nonprofit that seeks to increase the quality of learning in Kenyan and Tanzanian classrooms. It also provides life-skills training that’s not otherwise offered and emphasizes leadership.

Asante Africa works within each country’s existing educational systems; it’s not about building new schools. It concentrates on children and teachers in middle school and high school – the grades when students are most at risk of dropping out. According to Asante Africa, more than 100,000 students took part in its programs last year, and over the past 11 years, the nonprofit has served 500,000 students.

Sitting in her office in Oakland, Calif., Grasz talks about her decision to co-found the nonprofit. She firmly believes that every person has the talent to achieve his or her dreams, but opportunity isn’t always available. “I succeeded in my own life because others saw my talent as a young person and facilitated opportunities for me,” she notes. So she wanted to “pay it forward” for visionary professionals like Moshi and Nkuraiya, and young children with that same potential.

Back in 2006, Moshi was a budding safari company director who also hoped to grow a nursery school, something she wanted to do to give back to her community. Meanwhile, Nkuraiya was one of the first Masai women to become a school principal in the region. She wanted to rescue girls from early marriage and educate them, and eventually, she hoped to build her own elementary school so she could integrate the Masai culture into the curriculum.

As for Grasz, she had started as an electrical and systems engineer, spending about 15 years at California’s Lawrence Livermore National Laboratory. In the early 2000s, she entered the Silicon Valley corporate world, taking on several executive positions in engineering. During this time she always volunteered locally and made donations, but thoughts of personally creating an international philanthropic organization seemed like a stretch.

And yet just a few years later, she and the others launched Asante Africa, and by 2012, Grasz realized she needed to leave the corporate world to devote her attention full time to the organization.

Asante Africa has equal nonprofit status in Kenya, Tanzania, and the United States. And each arm of the organization enjoys a voice in the nonprofit. At the same time, Grasz insists that the US arm of Asante Africa primarily serves as the “back-office support,” while locals who know their communities lead the operations in Africa. “Our local African staff already know how to partner with these communities to tackle their tough problems,” Grasz notes. 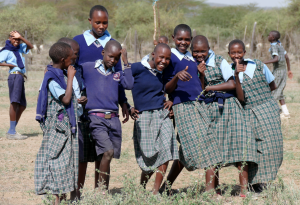 Asante Africa reaches far into the rural areas of Kenya and Tanzania, working with some of the most neglected and marginalized communities. To date, the nonprofit has introduced programs in more than 330 schools.

To monitor the work in person, Grasz travels to East Africa three times a year for four to six weeks at a time. But she says she sees herself more as a support, the coach for the staff and the young people. “My role is to help them recognize their own talents and skills and to help develop their confidence,” she says.

Mary Raber, professor of practice at Michigan Technological University in Houghton, has seen Asante Africa’s success firsthand. As director of the Global Leadership program at the university’s Pavlis Honors College, she has traveled and worked alongside her students for the past five years as they undertake international projects. “The benefit of working with Asante Africa is that they understand how to build community partnerships that are respectful and sustainable,” says Professor Raber, who is also the college’s assistant dean of academic programs. “The Tanzanian students become leaders of change in their own communities.”

According to Asante Africa, of its participants old enough to graduate from high school last year, 71 percent did so, qualifying for advanced education. (The average in the two countries is 32 percent, says Grasz, citing Kenyan and Tanzanian secondary education statistics.) And as more Asante Africa students came of age last year, 24 graduated from college or earned vocational or teaching credentials.

FROM CHEFS TO MILITARY OFFICERS 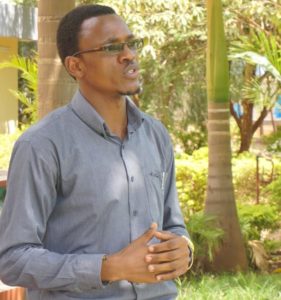 “As a young [Masai] boy, I worried about how to even sit in a classroom because of lacking school fees. Because of Asante Africa, I graduated high school in the top 1% of the country,” says Lepilali Benson in a testimonial provided by the organization. “I have … learned that leadership comes from being a servant to those who call me to lead. I take this very seriously.”

As for what’s next, Asante Africa is expanding. It’s bringing students and their teachers from Uganda and Rwanda to Tanzania for one of its leadership and educational incubator programs.

Grasz says that a young Tanzanian boy once asked her, “Why would you leave your career as an electrical engineer to become a beggar?” She says that the question initially took her aback. As the child of a German immigrant father and an orphaned mother, she remembers being a scruffy and feisty adolescent girl. Yet her teachers saw her potential before she did. “And they helped guide me to the blessed life I lead today,” she says. “My mother hammered into us that we all have talents and skills, and it’s your duty to give a supporting hand up and pay it forward.”

So Grasz told that young boy, “I saw a lot of young Ernas, and all they really needed was a hand up and someone to believe in them – until they believed in themselves.”

That young boy today is the soon-to-be heart surgeon in Tanzania.