Normalizing the Narrative on Menstruation; Empowering the Girl-Child

Menstrual Hygiene Management is a major health issue among women and girls of reproductive age, especially in many developing nations. Sometimes, this physical transition is met with anxiety and fear, riddled with communal and local stereotypes, misinformation, and myths. Substantive evidence shows that a lack of knowledge about puberty and menstruation can be harmful for adolescent girls. The conversation around menstrual health is widely considered a taboo in the conservative African space, to the detriment of many girls and women.

Lacking cultural acceptance, many schools are unable to offer adolescent girls necessary hygiene support and safe spaces, lacking in facilities and resources. This leads to higher rates of girls missing school during menstruation and in many cases discontinuing their education due to embarrassment, causing loss of self-esteem and confidence. Additionally, cultural stereotypes about menstruation and the lack of boys’ education on the subject threatens the psychological and emotional well-being of girls. To address these problems and encourage bold conversations Asante Africa Foundation spearheads their Wezesha Vijana (Girls’ Advancement) Program.  Asante Africa works with school-going girls in rural East Africa, among the marginalized communities to bring resources and after-school programs that promote girls’ self-development and skills.

Pamela, recounts her experience of being embarrassed at school. “One boy saw the blood stains on my dress and laughed loudly drawing the attention of fellow boys and my friends as we were playing soccer. Some of my friends joined in the laughter as the boys teased me, branding me “dirty.” My menstrual blood had leaked through the piece of blanket I had tied to my underwear since I could not afford a sanitary pad. I couldn’t control my tears from rolling down my cheeks in embarrassment as I saw my friends laughing at me. It was teacher Naomi who came to my rescue.”

Pamela, 15 years, is second born in a family of seven, from a nomadic family based in Samburu County, Kitobor village. Her family depends on livestock keeping and subsistence farming. Buying sanitary towels for her and her two sisters (17 & 12) is never a priority in the family as even buying food puts a strain on the finances.

Lack of basic needs caused Pamela to miss school on the days she was menstruating, instead, she attended market days or looked after the livestock. This resulted in her having self-esteem issues, which led to her performing poorly at school. However, in 2018, she joined the Wezesha Vijana Program, a school-based club at Kitabor Primary school while in class 7.

Pamela’s participation in the Wezesha Vijana club helped her access a full academic year package of sanitary towels and panties. She was also involved in the 3 hours weekly training on sexual and reproductive health and hygiene, financial literacy, HIV/AIDS, decision making, teenage pregnancy, gender based violence, and understanding children’s rights. She recounts how her self-esteem was revived along with her enthusiasm for school and her optimism for her future. Her performance in class improved significantly. She graduated in 2019 from class eight and enrolled in form one at Baawa Secondary school. She hopes to keep doing well and wants to become a Member of Parliament for Samburu West. 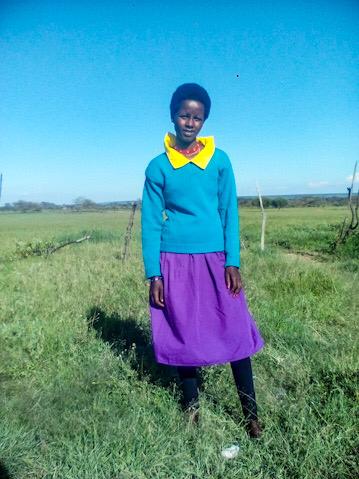 The stigma and taboos surrounding puberty and menstruation act as social barriers to women’s success. It prevents school-going girls from getting quality and equitable education and stifling their hope for a bright future. Inaccessibility to sanitation products and facilities, gender based violence, stereotypes and stigmatization about menstruation, and lack of role models who could offer social support to the girls are some of the major barriers that hinder menstrual hygiene management among the marginalized communities in Kenya.

Asante Africa Foundation’s Wezesha Vijana (Girl’s Advancement Program), strives to achieve the objectives that are direct indicators of the girls’ menstrual hygiene management, successful management of menses at school, girls’ continued education, and boys and community education and support. The program develops workbooks on a series of puberty-related topics, including body changes during puberty, how to cope with body changes, gender based violence, and teenage pregnancy. These workbooks are used to train 50 girls and 50 boys in each partnered school. The training aims to equip boys and girls with knowledge to: protect their bodies, manage their sexual and reproductive health, and manage menses at school.

The program also seeks to foster mother-daughter dialogue to examine and address barriers that limit girls’ opportunities. Parent meetings are held, quarterly, to help bridge the gap between mothers and daughters, or sons and fathers, and involve the parents communicating on sensitive topics with their daughters and sons to dispel myths and offer support. The outcome of these meetings is to enhance the participants’ change in knowledge and attitude towards girls’ education.

Menstruation, a sign of good health, must be normalized. Globally there has been increasing efforts to empower, educate, and engage leaders, communities, families, and adolescent girls and boys about menstruation, and to highlight the rights of women and girls to hygienically manage their periods. If we normalize the biological event and abolish the absurd silence and shame, the ripple effect will be an empowered generation of young girls and women.