The Fight to End Female Circumcision Begins with Education

In a recent interview, Purity Soinato Oiyie of Kenya remembers the day that her father told her she was to be circumcised. By ten or eleven years old, Purity was told she was to become the fifth wife of a seventy-year old man she had never met. The circumcision was to prepare her for this fate. Envisioning a different future, Purity spoke out and, with the aid of her class teacher, managed to escape the cut. She finished school and now serves as a tireless advocate for the elimination of African female circumcision. If female genital mutilation (FGM) is to end, Purity is certain that education holds the key.

Female circumcision or FGM is a harmful practice. It is a violation of women’s and children’s human rights and an assurance that gender inequality will prevail. Yet it is a practice that endures. It is one that is culturally ingrained. To uproot this tradition, hearts and minds must be transformed. Girls, boys, parents, and communities must be educated to understand its harmful effects, not just on girls, but on whole societies. Asante Africa supports programs in Tanzania, Kenya, and Uganda that educate and empower girls and their communities so no more are forced to undergo the cut.

Female Genital Mutilation is a procedure whereby some portion of the external female genitalia is removed for non-medical reasons. It is generally performed on young girls sometime between infancy and age 15, and it is most commonly practiced in Western, Eastern, and North-Eastern regions of Africa as well as some parts of the Middle East and Asia. However, FGM occurs in virtually every part of the world, as migrants from practicing regions continue to carry this tradition with them. (Read here our previous post on Amirah’s FGM experience as the daughter of an Ethiopian father living in the United States.)

Female circumcision is typically performed by a traditional practitioner, but, increasingly, health professionals have undertaken this role. This shift is likely the result of increased pressure to end FGM. Performance by medical personnel, defenders of the practice argue, helps legitimize FGM while combatting accusations of adverse health outcomes. But, despite such attempts to legitimize a harmful practice, evidence shows that female circumcision poses numerous health risks. In the immediate term, a girl might experience severe pain, excessive bleeding or hemorrhaging, infection, shock, or even death. Beyond these immediate risks, a female who undergoes the cut is at increased risk for urinary or vaginal problems, complications during childbirth, surgeries, and psychological problems such as depression and PTSD. With no health benefit and so many health risks, the question becomes why is female circumcision performed at all?

The Socio-cultural Roots of Female Circumcision

Since the UN adoption of the Declaration on the Elimination of Discrimination against Women in 1967, the international community has remained steadfast in its fight for gender equality. In recent decades, various measures have been enacted that deal specifically with FGM and its eradication. In 2012, the UN General Assembly designated February 6th as the International Day of Zero Tolerance for Female Genital Mutilation, with the aim of increasing awareness and spurring action to end this practice. When the UN General Assembly adopted the 2030 Agenda for Sustainable Development in 2015, it included the elimination of harmful practices, such as child, early and forced marriage, and female genital mutilation as a primary target of its Goal to achieve Gender Equality. Even in those regions where the practice is most prevalent, efforts have been made to combat FGM. In Africa and the Middle East, twenty-six countries have laws against FGM.

Despite pressure from the international community and progress made at the national and sub-national level, this year alone, 4.16 million girls are at risk of undergoing FGM. Though the reasons for its practice vary by region and across time, its justification is almost always rooted in tradition and social and cultural norms. Often it is practiced to increase a girl’s marriageability. In societies where girls are expected to marry and commonly forced to do so at an early age, FGM enhances a girl’s prospects and raises the bride price her family can demand.

FGM is also central to ideas about womanhood and femininity, as the cut removes parts that are perceived as unclean or unfeminine. FGM makes a girl “clean” and beautiful. Some girls are forced to undergo FGM to ensure sexual modesty. It is believed that a girl who is cut will remain chaste before marriage and faithful once wed.

Though there is no religious script that prescribes FGM, religion is another reason often cited to justify female circumcision. Indeed, religious justification is one of the most difficult obstacles to overcome as eradication challenges one’s religious beliefs.

In some places, FGM is performed because it has always been done. In such cases, the social advantage or social acceptance far outweighs the risk of social ostracism.

Jaha Dukureh, who underwent female circumcision when she was just an infant, is now a UN Women Regional Goodwill Ambassador for Africa and a staunch advocate for ending the practice. She explains that “there are still a lot of misconceptions about FGM, like it’s practiced by ignorant Africans and people over there who are uneducated, uncivilized. FGM is happening in Africa, but also in the Middle East, Southeast Asia, and even in places like Colombia and the United States of America and the United Kingdom! FGM is not about religion. It’s not about class. It’s not about education. I’ve seen some of the most educated people practice FGM because they believe it’s their culture.” Jaha understands that FGM is culturally rooted and that change requires men, women, and whole communities to rethink traditional practices. Uprooting tradition is no easy feat, but, when people are educated on the harmful effects of genital cutting and girls are made to understand their own rights, FGM can be eliminated. 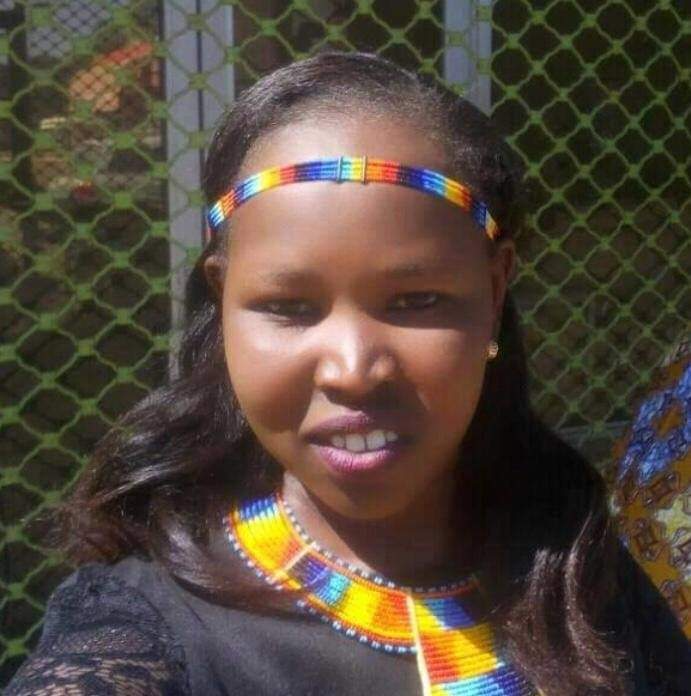 Naomi grew up in in a small rural village in northern Kenya. In her Samburu community, where nomadic pastoralism is a way of life, a girl’s worth is tied to marriage and the livestock that it brings the family.

86% of Samburu girls and women in Kenya aged 15-49 have undergone FGM. Naomi recalls her childhood when she saw many young girls in her village cut and married off. Against these odds, Naomi managed to finish school and is now a teacher at Kitabor primary school just four kilometers from her village.

Naomi believes that education is the only way to combat FGM and early marriage. As a teacher, she daily works to educate her students and their families on the harms of these practices and encourages them to pursue a different path. Naomi is grateful for the support she received and the confidence it gave her to write her own future. She is committed now to helping other girls do the same.

“With locally-organized seminars and Asante Africa’s mentorship programs, I have been creating awareness of girl child rights and instilling self-confidence in girls so as to maintain them in school and discourage them from early marriage and FGM.”

Naomi regrets the impact that the pandemic has had on girls in her village, explaining that it has exposed many more to the cut and forced marriage. Recently, Naomi, with the aid of Kitabor’s head teacher and the area chief, managed to help two girls escape this fate and enroll in school.

For her efforts, Naomi has been cursed by the elder men in her village for going against tradition. She has been mocked and threatened. Yet, Naomi continues to fight for girls and their right to live free of violence, discrimination, and those practices that cause them harm no matter how steeped in tradition they may be. “Nothing can stop the passion I have for the education of the young girls around me.”

For all the international attention that has been paid to eradicating FGM in recent years, change happens at the local level. It happens because people like Naomi speak out and stand up. Asante Africa is proud to support change-makers like Naomi. We hope that you will join us.

Progress has been made in the global fight to end FGM, and especially in recent decades. In the 31 countries with nationally representative prevalence data, the incidence of girls age 15 to 19 who have undergone FGM has decreased from one in two thirty years ago to one in three today. While progress has been uneven across states, overall, the trend has been encouraging.

In Kenya, the prevalence of FGM among adolescent girls has dropped from 5 in 10 to 1 in 10 over the last three decades. In Tanzania, women aged 45 to 49 are three times more likely to have been cut than girls aged 15 to 19, indicating a decline in the practice. In Uganda, the prevalence of FGM remains one of the lowest in East Africa at 0.3% among women aged 15-49 years.

The onset of the pandemic threatens now to undermine this progress. UNFPA estimates there may be as many as 2 million cases of female genital mutilation by 2030 that otherwise may have been averted had COVID-19 not struck. This highlights the imperative of education, not only for the physical safety a classroom provides, but for its power to effect change, to convince supporters of FGM of its harmful effects and to convert FGM practitioners into anti-FGM advocates. Research shows that if or when practicing communities themselves make the decision to eliminate FGM, then FGM can be eradicated rather quickly.

Asante Africa works at the local level to empower change. We engage parents, community leaders, and local organizations at every step to ensure our efforts are successful but also sustainable. Our Girls’ Advancement Program empowers young girls by educating them in reproductive health and children’s rights, providing them a safe and healthy learning environment, and mobilizing them to become community mentors. But, girls should not have to wage the fight for gender equality alone. Our Girls’ Advancement Program encourages greater communication between parents and daughters and teaches boys to value, respect, and support girls as their equals. When hearts and minds can be changed, harmful practices such as FGM will be eradicated. Education is the surest way to effect this change.