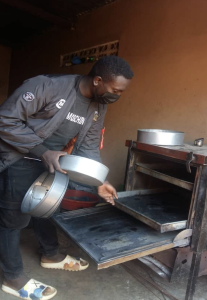 Solomon from Uganda is pursuing a Bachelor of Computer Science at Ndejje University while he also operates his own baking business, a trade he began learning in high school at age 17. At the 2020 LEI Summit, Solomon decided to open his own baking business, Creamy Creations, as an Income Generating Activity (IGA). Perhaps it’s not unusual for someone who apprenticed at one stage to set out on their own, but what sets Solomon apart is that soon after he began baking on his own last year, he quickly discovered that because his product was so good, demand outpaced his ability to keep up with it.

The traditional oven he baked with could only produce one cake at a time. After four months, with some money raised by cake sales and an eye toward innovation, he designed and constructed an oven capable of turning out 3-4 cakes at a time, better, but still insufficient, as demand for Solomon’s goods continued upward. With more cake sales, however, and solid money management learned at the Summit, Solomon was able to take some profits and purchase a commercial oven that can bake 5 cakes, and in less time.